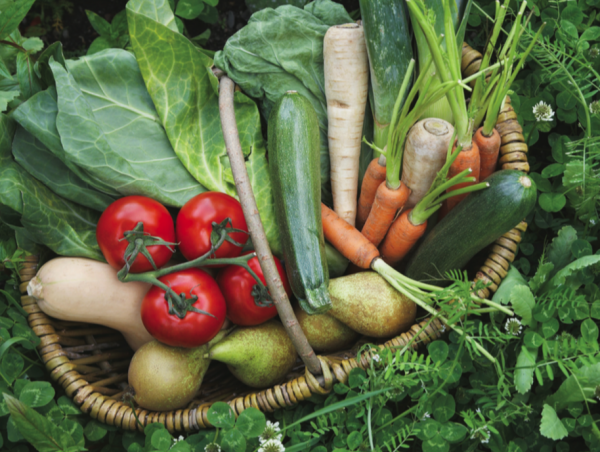 In The Omnivore’s Dilemma: A Natural History of Four Meals, Michael Pollan surmised that we’d be healthier if we ate the way our great-grandparents did. It would mean sticking to regularly scheduled meals instead of impulsive snacking, having a meat or protein item comprise only a quarter of our plate, adding fresh vegetables and eliminating junk food.

We must look further back than our immediate ances- tors, counters Jo Robinson, a food journalist who surveyed more than 6,000 scienti c research studies before writing her bestselling Eating on the Wild Side: The Missing Link to Optimum Health. She has also co-authored several other books, including The Omega Diet: The Lifesaving Nutritional Program Based on the Diet of the Island of Crete.

“Many believe we have dumbed down the nutrition in our food over the past 100 years,” says Robinson, who lives and gardens on Vashon Island, Washington. “Research shows we have been breeding out proteins and minerals and most importantly, antioxidants, for much longer.”

She points out that the hunter-gatherer diet encom- passed many wild foods that tasted more bitter, astringent, sour and earthy than the sweet blandness in today’s fruits and vegetables. Wild foods offered a wider variety of phyto- nutrients, but came at a cost—the time required to hunt and gather enough food for a day, let alone a season.

“Then, 12,000 years ago, we had a better idea—garden- ing,” says Robinson. “We evolved to 20 varieties in a garden versus 150 in wild plants.” First, farmers chose sweet, starchy, mild-tasting, oil-rich foods such as gs, dates and olives. “We’re hard-wired to choose high-calorie foods because they’re directly connected to the pleasure centers of the brain,” she adds.

After that, the trend to grow sweeter-tasting, less nu- tritious plants snowballed. Robinson cites research that found adding one Golden Delicious apple to the daily diet of a small group of overweight men led to higher levels of undesirable low-density lipoprotein (LDL) cholesterol and triglycerides due to its high-fructose content and low levels of antioxidants (International Journal of Preventive Medicine).

Even organic farming methods, in which the soil is naturally enriched, can’t return all those lost nutrients to our food. Rather than advocate that we return to eating wild foods, Robinson suggests nding wild equivalents. Even those that follow a paleo diet—presumably eaten by early humans and consisting chie y of meat, sh, vegetables and fruit, excluding dairy, grain products and commercially processed items—could use further re nements in the produce they choose. She recommends speci c varieties of fruits and vegetables and explains the bene ts of “wild” foods such as meat, eggs and dairy from livestock and poultry fed on grass on her website, EatWild.com.

We can make smarter choices, seeking wilder-type varieties of foods at the grocery store, farmers’ market and garden seed companies. In general, they are more vividly colored, especially from red to purple, and less sweet. Brightly colored fruits and vegetables indicate a botanical sunscreen the plant produces to protect itself from ultraviolet light and other external threats, notes Robinson; it’s an indi- cation of a higher antioxidant activity.

“Find as many purple foods as possible because they have anthocyanins, known to ght cancer and in ammation,” sug- gests Robinson. “The original carrot from Afghanistan is purple. It’s only been orange for the past 400 years when it was bred to salute the royal House of Orange, in the Netherlands.”

According to Robinson, we can also prepare our foods in ways that maximize their phytonutrient content. Eat fresh-picked asparagus and broccoli immediately or their natural sugars and antioxidants disappear. Let chopped or pressed garlic sit for 10 minutes before using so its pungent allicin—the healthy compound that bene ts our health—will increase. Tear fresh lettuce the day before eating and keep it fresh in a plastic bag with poked holes, to allow the still- living lettuce to rally its healthy compounds as if its battered leaves were repelling an insect attack.

This emerging science of polyphenols, the technical term for phytonutrients in our food, will be explosive, predicts this pioneering research-based author. “There’s a new study just about every month,” she nds. It can all lead toward breeding and growing more nutritious foods that are more readily accessible to everyone.

The old way of thinking about fruits and vegetables is ‘the more, the better,’ regardless of what you choose,” says wild food expert Jo Robinson. “Unfortunately, the most popular ones are the least nutritious, like Golden Delicious apples and supersweet corn.”

In Eating on the Wild Side, Robinson cites considerable research that shows we can make better choices within each food category by simply selecting varieties closer to their wild ancestors. Generally, the most phytonutrient-rich options include kale, spinach, lettuces, asparagus and artichokes. Here are other top tips from the literature.