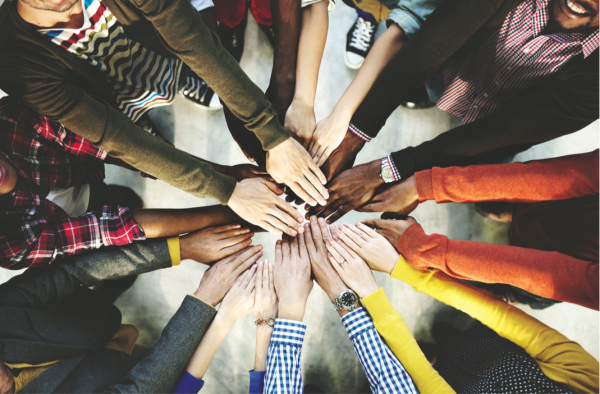 “Ours is not the task of fixing the entire world all at once, but of stretching out to mend the part of the world that is within our reach. Any small, calm thing that one soul can do to help another soul will help immensely. It is not given to us to know which acts, or by whom, will cause the critical mass to tip toward an enduring good,” says Clarissa Pinkola Estés, Ph.D., a world-renowned author and Jungian psychoanalyst specializing in post- trauma counsel.

Thousands of people each day choose to see a world radiating with hope and light, despite ever-present con ict and strife. Their talents and gifts, alliances and collaborations are inspiring a new story that ripples outward into our communities and beyond.

In The Ten Gifts: Find the Per- sonal Peace You’ve Always Wanted Through the Ten Gifts You’ve Always Had, author Robin L. Silverman affirms that everyone can reach within, even in the worst of circumstances, for treasures that can be used to improve the lives of others. She concludes, “We are not meant to use our gifts simply to survive, but to satisfy our souls and inspire others to do the same.”

Komal Ahmad was unaware that her single act of kindness Komal Ahmad in simply offering to share her lunch with a homeless veteran in 2011 while she was attending the University of California, Berkeley, would lead to a multiplying mission to feed America’s hungry. His heartfelt expression of gratitude for his rst meal in three days sparked an epiphany: Her school was regularly throwing away thousands of pounds of food while neigh- bors were going hungry.

Today, Ahmad is the founder and CEO of Copia, an app that matches nonpro ts serving in-need veterans, children, women and others with companies that have leftover gourmet food. Following the 2016 Super Bowl, she used Copia’s technology to orga- nize food pickups throughout the San Francisco Bay area. What she calls the “right thing to do” fed more than 41,000 people that day.

Named one of Toyota’s 2016 Mothers of Invention, Ahmad uses the company’s $50,000 grant to boost Co- pia’s services throughout the U.S. Re- cently, German and Austrian government of coals expressed interest in expanding the service to help feed Syrian refugees in their countries.

Friends Margot McNeeley and Janet Boscarino in Memphis, Tennessee, looked around for local problems they could x and took action starting in 2008. A former retail entrepreneur, McNeeley didn’t want food to go to waste and created the Project Green Fork certi cation program after learning that 95 percent of restaurant waste can be diverted from land lls. Her nonpro t helps restaurants to conserve water and en- ergy, develop recycling and compost- ing systems and switch to biodegrad- able containers and environmentally friendly cleaning operations.

Boscarino’s experience in business development and sales, com- bined with her disdain for litter, led her to found the nonpro t Clean Memphis, which began in 2008 with volunteer crews picking up litter. In recent years, the initiative’s community-wide strategy has expanded to involve local governments, businesses, neighborhoods, faith-based organizations and 20 local “sustainable schools”. In 2017, Project Green Fork will become a part of Clean Memphis.

Throughout two decades of educational activism, John G. Heim’s passion for clean water as a human right has not waned. The founder and leader of The SWFL Clean Water Movement, headquartered in Fort Myers Beach, Florida, persisted even when many business owners considered him a nuisance, driving off tour- ists.

As infestations of blue-green algae blooms have reached emergency levels, Heim’s ongoing grassroots campaign to increase awareness of water quality issues that’s backed by social media recently brought him to Washington, D.C., to make his case before Congress. The nonprofit’s 18,000 members have succeeded in bringing national attention to the thick muck now plaguing both Florida coasts. They’re working to alter nutrient-laden discharges from Lake Okeechobee that send agricultural toxins and rain overflow down the Caloosahatchee and St. Lucie rivers and out into vital estuaries.

“For the next six years, our goal is to annually train 50 people that will train 50 more people. Continuing this exponential growth pattern means the potential for 312 million more people living more compatibly and lightly upon the Earth. We’ve already established collaborations with six other cities around the U.S. that can potentially duplicate our efforts,” says Bunn.

We are a community of possibilities, not a community of problems. Community exists for the sake of belonging, and takes its identity from the gifts, generosity and accountability of its citizens. We currently have all the resources required to create an alternative future.
~Peter Block, Community: The Structure of Belonging

Martie Whittiken, of Plano, Texas, a board-certified clinical nutritionist and host of the Healthy by Nature nationally syndicated Gigi Pomerantz radio show, uses her talents to advocate for health freedom in America. Educating listeners for 19 years, she served as president of the National Nutritional Foods Association during crucial phases of the 1992 to 1994 get to successfully pass the Dietary Supplement Health and Education Act to preserve consumer choices.

The author of The Probiotic Cureal so helped found the Texas Health Freedom Coalition to protect citizens’ rights to choose alternative medical treatment in her state. Whittiken says, “My work is a labor of love. I have no interest in becoming famous or well known unless it contributes to getting the job done.”

On a 2006 medical mission to Haiti, Gigi Pomerantz, a licensed nurse practitioner at the Aurora Sinai Medical Center, in Milwaukee, dis- covered the impact of a lack of clean water and sanitation as her four-person team treated 1,400 patients for worms, stomach problems, diarrhea and poor appetite. Two years later, she founded Youthaiti, where she serves as executive director.

Psychotherapist Jacqui Bishop and Integrative Nutritionist Lisa Feiner, co-founders of Sharp Again Naturally, in White Plains, New York, believe that dementia is reversible, and no case should be considered hopeless until all causative factors have been tested and ruled out. Their resolve for eliminating causes of disease rather than managing symptoms is based on University of California, Los Angeles, research studies and sources quoted in a Health Advocates Worldwide documentary.

As an Emmy Award-winning trumpeter, composer, educator and co-founder, conductor and artistic director of the Chicago Jazz Philharmonic (CJP), Orbert Davis is dedicated to multigenre projects. His collaborative research in 2012 while in Cuba on a people-to-people exchange accompanied by fellow musicians and River North Dance Chicago’s Artistic Director Frank Chaves (now retired) proved to be a multifaceted boon.

It generated the philharmonic’s Havana Blue live performance in 2013 and ignited a weeklong cultural exchange with Cuba’s Universidad Ci- udad de las Artes (ISA) during his re- turn trip for the Havana International Jazz Festival in 2014. President Barak Obama’s announcement of the normalization of Cuban/U.S. diplomatic relations opened up the possibility for a continuing CJP/ISA relationship, as well as their 2015 landmark partnered event when 37 ISA students traveled to Chicago to perform Scenes from Life: Cuba at Chicago’s Auditorium Theatre. Davis promises more such events to come.

All of these individuals represent a small percentage of the game-changers actively moving to create an alternative future. Estés observes, “What is needed for dramatic change is an accumulation of acts; adding, adding to, adding more, continuing. We know that it does not take everyone on Earth to bring justice and peace, but only a small, determined group that will not give up during the first, second or hundredth gale.”

Linda Sechrist is a senior staff writer for Natural Awakenings. Connect at ItsAllAboutWe.com.

We use cookies to ensure that we give you the best experience on our website. If you continue to use this site we will assume that you are happy with it.Ok