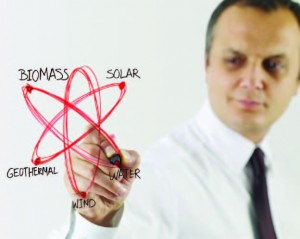 Hydroelectric, geothermal, solar/photo­voltaic, wind and biomass combined make up a growing segment of the mix: 11.7 per­cent as of June 2011, surpassing nuclear at 11.1 percent. For the same period in 2010, nuclear was 11.6 percent, and renew­able was 10.6, according to the U.S. Energy Information Administration.

Forbes reports that many environmentalists, however, think that the two prominent technologies that currently make up much of the renewables sector—hy­droelectric power, at 35 percent, and biomass, at 48 percent—are the least attrac­tive. (Wind is the third-largest, at 13 percent of renewable, 1.5 percent of the total.) Large-scale hydroelectric power production has harmful impacts on river ecosystems and has become less popular in the developed world. As for biomass, each of the many types of feedstock must be evaluated individually for its emissions profile, water footprint and other considerations, such as whether farm fields or forests need that material to decompose in place in order to retain soil or ecosystem function.