Sadhguru is an Indian yogi and mystic who founded the Isha Foundation, a volunteer-run, international nonprofit organization dedicated to cultivating human potential through a customized system of yoga in its full depth and dimension.

Headquartered at Isha Yoga Center in southern India and the Isha Institute
of Inner-sciences in the United States, the Isha Foundation operates in more than 150 cities in 14  countries. Isha’s signature program, Inner Engineering, is structured scientifically to present simple but powerful processes from the yogic tradition, to transcend the limitations of each individual and bring people to higher levels of consciousness. Inner Engineering gives people the tools to create the lives they want.

Sadhguru will be in Detroit to lead the workshop Inner Engineering, from October 12 to 14. Natural Awakenings (NA) obtained this interview with Sadhguru (S) to learn more about his current focus and plans for the upcoming visit.

NA: Why have you begun to emphasize the importance of raising human consciousness more than ever over the past year or so?

S: For the very first time in history, we have the capability, the resources and the technology to solve all the basic human problems of nourishment, health and education. Never before was this possible. A hundred years ago, even if you dreamt of it, there was no capability. Today, we are capable. The only thing that is missing is human consciousness. If only human consciousness, especially in the leadership, was more inclusive in the approach to life, all these fundamental problems of human survival and existence could be sorted out. Today, it is not an empty dream; it is a standing possibility. However, between possibility and reality there is a distance. As a generation of people, we must ask ourselves, “Will we walk the distance or not?”

NA: What kind of impact can one person have on raising human consciousness? How does one’s personal growth affect a community?

S: Even if just a few people in a group are truly meditative, the whole group will experience the benefit of
this. If you do it for yourself, it will naturally happen around you. Slowly, the quality will be imbibed. We have been conducting yoga programs in the prisons in the state of Tamil Nadu in South India for the last seventeen years. About thirty percent of the people have started meditating in these prisons and a huge, miraculous change has happened. When we first went to one of the prisons, in its 136-year history, not a single day had passed without somebody being in solitary confinement. After the program, not a single person went into solitary for the next three months. They started writing poetry! Wherever people start meditating, suddenly there is a whole change in the situations around them. If you make just one percent of the world truly meditative, the world will be fantastic – the remaining 99% will just be sucked into it.

S: Consecration is a live process. It is like this: if you transform mud into food, we call this agriculture. If you make food into flesh and bone, wecall this digestion. If you make flesh into mud, we call this cremation. If you can make this flesh or even a stone or an empty space into a divine possibility, that is called consecration. Today, modern science is telling you that everything is the same energy manifesting itself in a million different ways. If that is so, what you call the Divine, what you call a stone, what you call a man or a woman, are all the same energy functioning in different ways. For example, the same electricity becomes light, sound and so many other things, depending upon the technology. If you have the necessary technology, you can make the simple space around you into a divine exuberance. This is the phenomenon of consecration.

It is my dream that someday the whole humanity should live in consecrated spaces. Human beings can carry a phenomenal sense of energy, intellect and capability if you create large consecrated spaces where the whole generation of people are in touch with that kind of energy and space.

You have been consecrating the feminine goddess energy in many places throughout the world. Some people think this is pagan worship. Can you explain its purpose and how can people benefit from it?

When I say feminine, I am not talking about being physically male or female. The feminine can be as alive in a man as it is in a woman. The feminine and masculine apply to certain qualities. Only when these two qualities happen in balance, can a human being live a life of fulfillment.

For a long time, humanity has given too much significance to the masculine because survival has been the dominant factor. It is only when societies have handled their survival well and reached a certain level of stabilized culture and civilization that the feminine can flower. Societies are now coming to that phase, but one thing that is also happening is that economics is becoming the primary force in the world. We are once again bringing everything down to the level of survival, so the masculine will once again dominate. Many women may be becoming CEOs, but to do this, they have had to drop the feminine and operate more like men. There is no room to use the feminine in these situations. Without the feminine, we will have full-grown trees that will never flower; you will have everything in your life and you will have nothing in your life.

Today, with the available technology, if all the seven billion people become alpha-males driving themselves full-scale, this planet will not last very long. If the feminine were in equal expression as the masculine, human sense would definitely save the planet.

NA: What do you wish to accomplish when you come to Detroit in October?

S: My effort is to bring a technology for your well being. Today there are various technologies to bring external well being. Because of these technologies, human life has become more comfortable and convenient than ever before. As a generation of people, we are the most comfortable generation ever, but we cannot say we are the most joyful generation. We cannot say we are the most peaceful or loving generation. This is because we have taken care of the external technologies, but we have not made use of the inner technologies. So, I’m coming to Detroit to offer this dimension in utmost purity and in the way it works. Technology essentially means doing things the way it works, not doing things the way you believe it is. Technology is non-discriminatory; you may be a man, a woman, a Christian, Muslim, Hindu, whatever. It doesn’t matter; when it comes to technology, you just have to learn how to do it, and it will work for you.

Right now, you see millions of people busily engaged with their iPhones and iPads, but I’m asking you what about the personal I? This human being is the most sophisticated piece of machinery and technology. If you learn to empower this, if you learn to operate this in its full depth and dimension, you will live your life magically, not miserably. So, this is my offer to everybody, not just in Detroit, everybody anywhere in the world. This is my offer that it is time that you learn to operate your well being in a scientific manner.

Karen Jacobson is an editor for the Isha Institute of Inner Sciences. Lauressa Nelson also contributed to this article.  To learn more, visit BeBreatheBlossom.com or IshaFoundation.org. 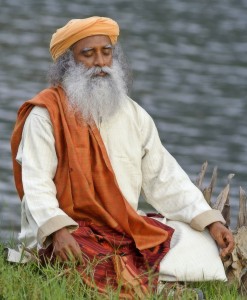 Links to some recent books:

Midnights with the Mystic: A Little Guide to Freedom and Bliss

Essential Wisdom from a Spiritual Master

Project Bloom: A Yogi’s Wisdom for the Workplace